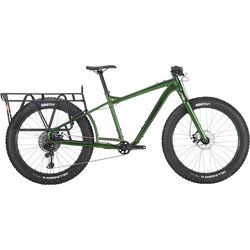 Salsa Blackborow GX Eagle - 2020
$4,399.99
Blackborow is Salsa’s "dream big" cargo fat bike, best paired with an unlimited imagination. The extended wheelbase and rear stays offer huge carrying capacity via abundant frame and fork braze-ons, supporting room for four full-sized panniers on the beautifully engineered rear rack. Top-shelf, double and triple-butted, heat-treated 6066-T6 aluminum tubing is used throughout the frame. Additionally, the tubing is strategically shaped and formed for additional stiffness and strength optimization in key stress areas. The front end is compatible with all our rigid fat bike forks and also fat-specific suspension forks. When Blackborow is sensibly loaded, the bike still feels well balanced and is a pleasure to ride on winding trails compared to other long-tail cargo bikes. Featuring carbon construction with an aluminum steerer, the Kingpin Fork is lightweight and durable, and features an amazing array of accessory bosses to maximize its capabilities: dual sets of Three-Pack bosses on each leg accept bottle cages or our Anything Cage accessories, lowrider mounts work with our Down Under front rack for a traditional touring setup, and internal dynamo hub wire routing keeps the front end clean for those upgrading to dyno hubs. Blackborow is compatible with 26 x 3.8–4.33" tires on up to 100mm rim, 27.5 x 3.25–4.0", or 29 x 2.3–3.0". The ability to run multiple wheel and tire sizes allows you to customize the experience and fine-tune the ride height as needed. A removable direct-mount front derailleur bracket allows for a clean 1x build, but it’s also compatible with 2x drivetrain setups. Plus, it’s got internal routing for a dropper post. Blackborow is all about new possibilities, and owners will find themselves able to merge an array of other interests into their two-wheeled adventures. Salsa's Blackborow GX includes an array of high-quality components to support the remotest excursions. SRAM's GX Eagle drivetrain features strong and lightweight components as well as a wide-range 12-speed cassette for tackling quickly varying terrain. A set of SUN Ringle Mulefut rims have a plenty-wide 80mm footing, perfect for floating the 45NRTH Dillinger 27.5 x 3.8" tires. A suite of tried-and-true Salsa cockpit components and a WTB Volt saddle round out the build.

Surly Big Fat Dummy - 2019
$4,349.99
The Big Fat Dummy is a long tail cargo bike that took a few too many doses of growth hormones. At first glance, you might say that Surly just put bigger tires on a Big Dummy. But if you said that, you'd actually be very wrong so just… don't. Think of Big Fat Dummy as more of a second or third cousin to Big Dummy rather than a brother. They share some of the same DNA and look sort of similar, but they're two very different bikes and really only interact when they both reach for the potato salad spoon at that family reunion that no one really wants to be at anyway. Now that that's out of the way, let's get down to the nitty gritty of what makes this hulking beast of a bike tick. Surly's goal with designing a cargo bike around fat tires was to create the most stable, stiff, and traction-laden ride possible while hauling a ton of stuff. Big Fat Dummy has a longer toptube and slacker headtube than its more svelt cousin giving it a nice, predictable, and stable ride. They also used thinner, lighter tubing to construct its cargo area so while it's an overall burlier bike, there's not much difference in weight. Big Fat Dummy accepts either 10mm or 12mm axles in the rear with a spacing of 190/197mm. That big ol' spacing equates to one thing: tire clearance for days. Big Fat Dummy maxes out at a massive 26 x 5.25" tire.* While that large of a tire provides the most traction and stability a bike can possibly offer, it's also a lot of rubber to push and might not be for everybody. Luckily, Big Fat Dummy is also a blast to ride with 3" tires too. It uses the same 100mm suspension-corrected fork as the Wednesday, meaning if you want to add a little squishy squishy to your ride, you can throw a Bluto on and let ‘er rip. If you intend to carry a passenger on your Big Fat Dummy, Surly requires use of their Dummy Rail Collars. These provide a secondary retention system for the rack, as well as stiffen the rack system. In addition, a stoker handlebar set up, found on tandem bicycles, is recommended as well. Make sure to check with seat post manufacturer for stoker handlebar compatibility. All Big Fat Dummy framesets and bikes ship with a Dummy deck, rails, bags, and the aforementioned Dummy Rail Collars so you can immediately start hauling cargo — human or otherwise. Big Fat Dummy is ready and willing to carry all sorts of crap — literally. It's already in use on an organic farm in Ecuador so it's likely that it's hauled some form of manure by now. *Using a 26 x 5.25" tire will cause some drivetrain limitations.
Page 1 of 1