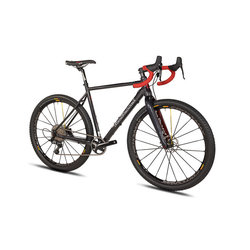 Van Dessel ADD | Frame
$1,099.99 $1,319.99 17% Off
We may be the only bike company in the world to suggest you only need to own a single bike. But having pioneered the gravel/adventure bike realm (ahem, Country Road Bob, circa 2000) we know a thing or two about designing bikes with a tasty blend of performance, durability and versatility. It’s an idea we’ve pushed even further with the A.D.D. Road bike, CX bike, mountain bike, loaded touring/adventure bike—you can run 700 x 25–40mm road, CX or gravel tires, or switch up your wheels and run 27.5 x 2.1 MTB knobbies. There are also bosses for 3 bottle cages, eyelets for racks and fenders, weather-resistant cable routing, and dropout options for your wheel collection, all on a single high-performance 7005 series aluminum frame. 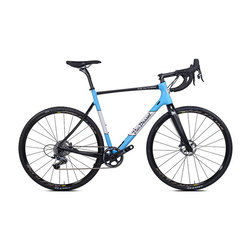 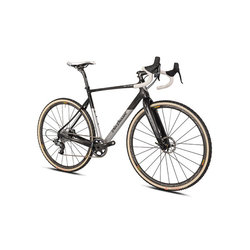 Van Dessel Full Tilt Boogie | Frame Kit
$1,999.99 $2,374.99 16% Off
This is a full carbon cross frame that isn't messing around. Tuned for super responsive acceleration off start lines, through hole shots, out of hairpins and wherever else instantaneous speed is needed. Oh, and we added bottle cage bosses, cuz humans get thirsty. But forget cantilevers, this frameset is disc only. Not to mention light, smooth, responsive and thru-axle or quick release compatible. 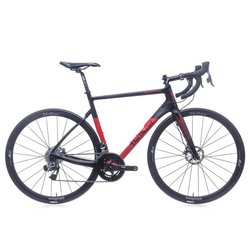 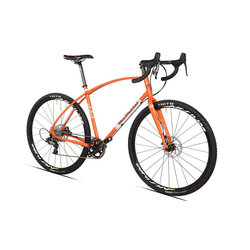 Van Dessel Whiskey Tango Foxtrot | Frame Kit
$799.99 $929.99 14% Off
While you could race the Whiskey Tango Foxtrot, you’ll win more style points than cash. Comfort and stability took design precedence over high performance and low weight —the trade-off for a do-all geometry with a super smooth relaxed ride, and a penchant for having fun. The low standover and spacing to fit tires from 700 x 28 to 29 x 2.1 suit rough-road and off-road use. And the geometry gives you the option of flat bars or drops, and lets you slap on fenders and racks for long-range endeavors. You can even run a belt drive. And since it’s made from 4130 CrMo, it can take some knocks and not even flinch, which is perfect for adventure, cross country touring, monster cross, gravel grinders, and deflecting the insults of frustrated motorists as you commute faster than they do. 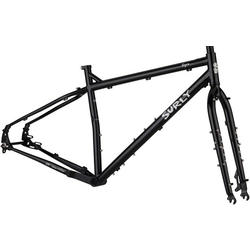 Surly Ogre Disc Only Frameset
$949.99
If you’re like us, your bike needs will likely change by the day, week, month or year. Ogre will get you to your job during the week, then way out of town on the weekend. It even has the chops to handle a cross-country trek or nine. It’s not sluggish on pavement or gravel and can also hold its own on singletrack. Ogre is designed to be the ultimate steel utility vehicle. It relishes in those “take-the-long-way-home-and-find-some-beverages-along-the-way” sort of commutes. You can also haul enough crap on it that you don’t even have to go home if you don’t want to. For this year, we simplified Ogre a bit. We removed the canti studs, so it is now a disc brake-only beast. Now, before you start yelling at us about how the canti studs were the only reason you were even considering buying an Ogre and now we’ve left you contemplating your very existence in this ultimately-doomed universe, hear us out. Rim brake 29er rims — like the ones that you would need to have to make use of those canti studs in the first place — are becoming increasingly harder to find. We could have given you a feature that you’d end up not really being able to use in the future but what kind of monsters do you think we are? To quench your unquenchable thirst for rim brakes, check out the Troll. As far as other updates to the frame go, that about sums it up. Ogre still has everything else you’ve come to know and love: two water bottle mounts, four sets of three-pack bosses, mid- and low-blade fork eyelets, threaded holes for racks, fenders, and trailer mounting nuts, and a Rohloff OEM2 axle plate slot. It still features horizontal-slotted dropouts with Gnot-Boost spacing, a tweaked non-suspension corrected geometry, and a beefy tire clearance. It’s still fully compatible with both 29 x 2.5” and 27.5+ tires. In the complete bike version, we’ve opted to go with a 1x drivetrain and a flat handlebar. We typically try to avoid BS cliché terms like “Do-It-All” or “Swiss Army Knife of Bikes”, so we’ll just say that Ogre can probably handle most of the ideas that are bouncing around in your head. 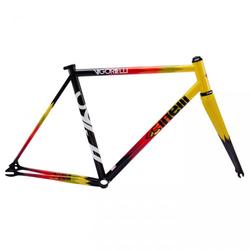 Cinelli Vigorelli Electric 17 | 59 (XL) - 2017
$1,017.50 $1,399.99 27% Off
Designed and tested with the riders of Team Cinelli Chrome, the 2015 Red Hook Crit Champions. In conjunction with the newly remodeled Viogorelli Velodrome, steel is back in competitive crit racing. STEEL IS BACK TO COMPETE The frame allows for unique weight distribution that only steel can produce, thanks to the advanced management of the steel tube thickness. Extremely reactive geometry to minimize energy dispersion. HIGHEST BB EVER Raised bottom bracket to allow continuous pedaling through every curve. 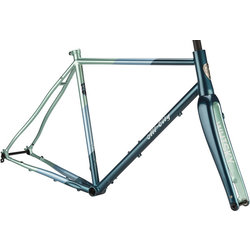 All-City Cosmic Stallion Frameset
$1,699.99
The Gravel / All-Road / Endurance thoroughbred! The CS embodies all of All-City's bicycle ideals in its execution. As is their passion, All-City combined the classic artistry of a lovingly detailed, handbuilt steel frame with current technology, creating a bike that is both timeless as well as thoroughly contemporary. It is designed to be the ultimate for covering ground quickly over any road surface you may encounter. Whether you’re traveling and can only bring one bike, crushing gravel classics such as the Dirty Kanza, or just want to know that whatever the heck you end up getting into for the day your bike can handle, The Cosmic Stallion is The One! While it excels on smooth roads, when things start getting bumpy the Stallion really shines. It does a great job of soaking up road chatter, yet is so fast and efficient. It’s also incredibly versatile in its feature set. You’ll find three bottle mounts, as well as mounts for a rear rack and fenders. It also sports a full carbon Whisky No. 9 fork, All-City's own A.C.E. tubeset, a tapered head tube, lovely shaped stays, thru-axles, Shimano Di2 compatibility, and fits 700c x 45 or 650b x 47 tires. The A.C.E. tubeset found on the Cosmic Stallion was custom designed for all-road riding and racing. The tubing is seamless, heat treated, Air-hardened, and Custom Extruded to All-City's exact specifications and needs. The use of full frame A.C.E. Tubing allows the engineer total control over the butting profiles and wall thicknesses and has allowed All-City to build their lightest disc frame yet, a full 5oz lighter than the 853 Macho King, as well as achieving the ride characteristics they were after. 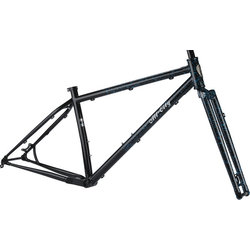 All-City Electric Queen Frameset
$1,499.99
The All-City Electric Queen was expressly made for maximum fun. Sitting squarely in the “trail” category it goes up almost as well as it comes back down. Short wheelbase, modern trail geometry, and plus size tire clearance makes this a non-stop dirt party no matter what terrain you’re tackling that day. Its whippy 612 chromoly frame with internal dropper post routing, boost spacing, and those short chainstays make berm-carving and wheelies second nature. Build your Queen with 27.5+ wheels and tires with your favorite fork, drivetrain, and brakes for a dreamy rig that rules with radical energy. 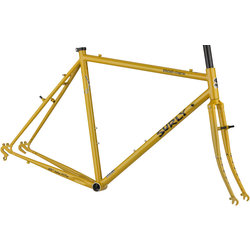 Surly Cross Check Frameset
$699.99
Cross-Check is a tough-as-nails, super-versatile road bike that performs astonishingly well on any surface. There is no such thing as one bike that can do it all, but Cross-Check comes pretty damn close. It's a dyed-in-the-wool commuter and utility rig. It was a gravel crusher long before "gravel bikes" existed. Some people have even raced cyclocross on it. Though, we don't necessarily condone that behavior. Cross-Check was the first complete bike we ever offered. Since then, people have modified them hundreds of different ways to suit their riding styles and preferences. There’s a reason that nearly every person who has ever worked for Surly has owned one. - Semi-horizontal dropouts for singlespeed compatibility and wheelbase adjustability - Gnot-Rite dropout spacing allows installation of 130 or 135mm hubs - Accommodations for front and rear racks and fenders - Clearance for 700 x 42mm tires with or without fenders 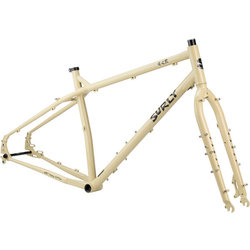 Surly ECR 27.5+ Frameset
$999.99
The ECR is Surly's answer to those times when you just need to escape to the woods for a while to get away from the humdrum of life. Those familiar with this steel mule know it’s designed around plus tires, previously of the 29” variety. A fully loaded 29+ bike is an excellent way to explore and get away for a while… if you’re of a certain stature that is. For smaller riders, it poses several challenges though. And no one wants new problems when they’re in the woods trying to escape old ones. To solve this, Surly redesigned the smaller sizes of the ECR to work with 27.5+ while the larger sizes are still equipped with 29+. All you medium specimens out there get your pick of the litter as they're offering that size in both options. Other updates to the ECR include and are limited to: Gnot-Boost rear spacing and a killer new beige paint job. It retains the abundant accessory mounts that we all know and love like Surly Trip Guide for brakes and derailleurs, fender, rack, and Bill/Ted eyelets, and a Rohloff torque arm slot. The 27.5+ sizes also feature two sets of Three-Pack bosses. You’ve got lots of options to bring all your “necessities” with you and still have room for excess baggage if you’ve got it. 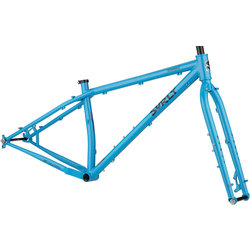 Surly Krampus Frameset
$949.99
Krampus is a dedicated 29+ trail bike that can go over, off of, or through just about anything in its path. Breaking the Mold with a 29er Bike As the first "plus" bike to hit the market, Krampus changed the way many people approach trail riding. It’s shown people the light of how high-volume, large-diameter tires can vastly improve the ride experience. It’s also done a bang-up job dispelling the myth that big tires make you slow. Krampus is kind of like the opposite of a mullet: long in the front and short in the rear. With a long toptube and compact chainstays, it takes trail-shredding abilities to the next level. A mullet may be business in the front, party in the back but Krampus makes partying its business. "Lean back, hang on, and ride that wild horse." -Thor - Modern trail standards: dropper post compatibility, 44mm headtube, Gnot-Boost rear spacing, thru-axles, suspension corrected fork - Compatibility with most mountain bike standards makes it the perfect parts bin bike (no rim brakes allowed, though) - Clearance for 29 x 3" tires 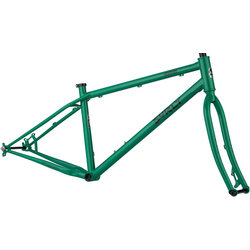 Surly Lowside Frameset
$799.99
Lowside is the bike that gets you across town for a quick rip on singletrack, then over to the bar for a night out. Lowside is like the grownup version of the bike you rode when you were a kid and still had hopes and dreams and some semblance of ambition. It’s just as happy riding singletrack as it is parked outside your favorite drinking establishment. Lowside is a singlespeed. Singlespeeding has been a part of Surly’s DNA since day one when we launched the 1x1 Rat Ride. After a lot of Homie Fall Fests and more feats of strength than we can recall, we decided to discontinue it a couple years back. Lowside picks up right where the 1x1 left off. Some have dubbed the Lowside the ultimate pub cruiser. - Modern trail standards: dropper post compatibility, 44mm headtube, Gnot-Boost rear spacing, thru-axles - Compatibility with most mountain bike standards makes it the perfect parts bin bike (no rim brakes allowed though) - Clearance for 26 x 3 or 27.5 x 2.8 tires
Page 1 of 1